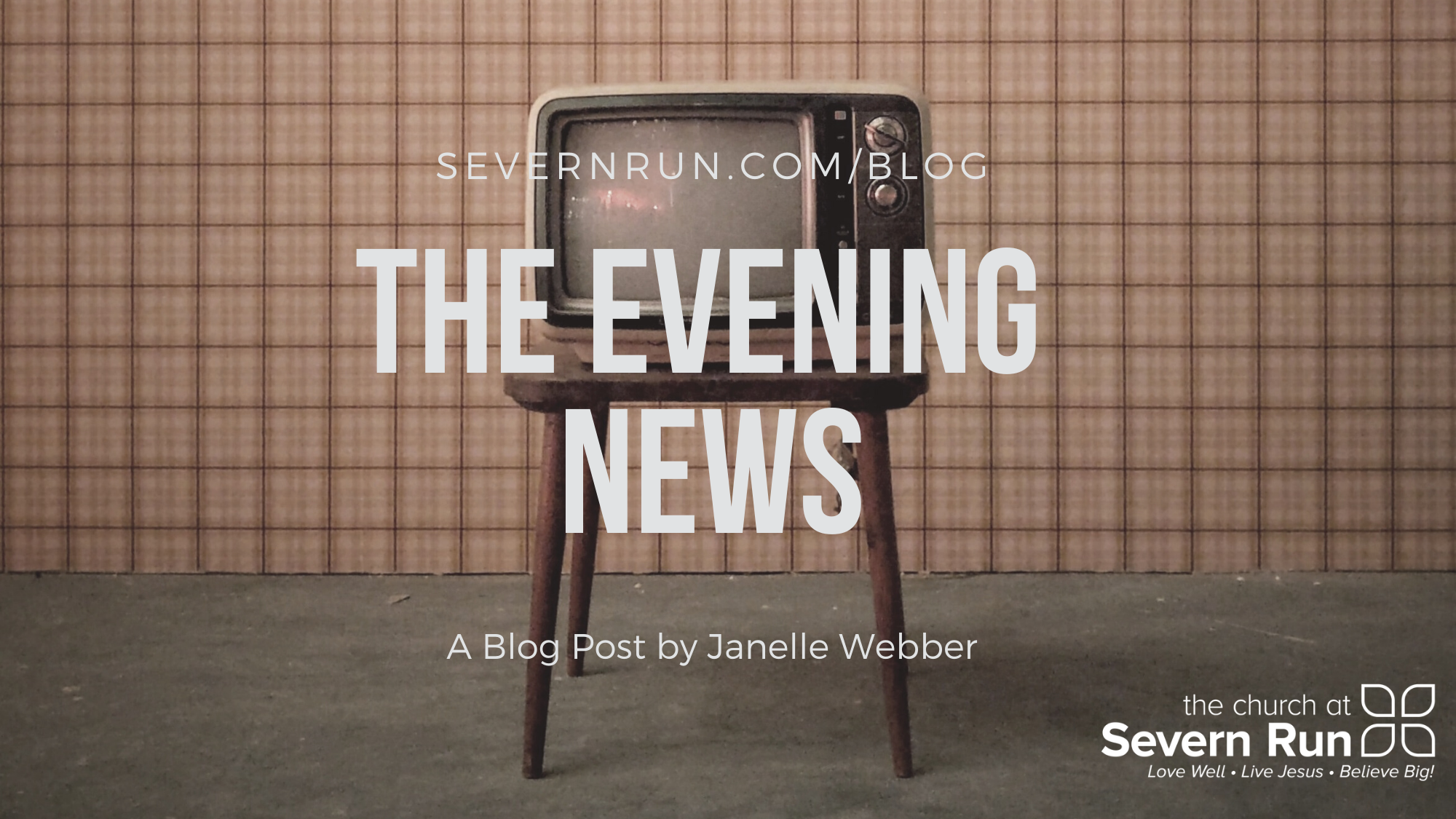 I have started a new ritual. It’s debatable as to whether or not it is a good one but for now I am staying the course.

When I was growing up in the Midwest watching the nightly news was standard evening practice. We only had one channel to watch so it was always the same network. Every few years the TV station would get bought out and we would have a new evening anchor, sportscaster and weather reporter.

My parents always watched, just watched. Never debated or commented.  They took in all the information and that was that. As a child, I didn’t think too much about it. I don’t know if it was because they simply had the same basic opinions or they had learned after 20 plus years of marriage that it was best to not discuss the news.

Eventually I left home, went to college and began raising a family. Eventually the late night evening news became part of my daily routine. Then I moved to the East coast…

“What happened?” I asked myself. Why does fitting in the evening news seem to be so difficult? There are a plethora of news options. However, one was  too early, one was too  late, others were too long, and none were just right. Then I discovered something…the major news networks were making their evening news into podcasts that were available later each night. This was perfect!!!

Now I can multitask during my morning prep time…I  can do my makeup, hair and pick out my clothes all why listening early in the morning to the last evening news!!

Starting the day with news can be wonderful, until it isn’t. The world events of today, particularly of the war in Ukraine are difficult to hear any time of the day. After the last month of day after day on the worsting war, it was finally changed my prayer from “God, I trust that you got this situation.” to “God, why are you allowing this to happen?” to telling God, “You could stop this if you wanted to do so. You are all powerful after all.”

As God’s perfect timing would have it, the morning I prayed these words I also got the following email devotional. One of the ladies on the writing team puts these sweet emails  together to send to family, and some friends, each day.

This is what I read:

“Good morning family. 1 Timothy 4:1 says: “The Spirit clearly says that in later times some will abandon the faith and follow deceiving spirits and things taught by demons.”

Now is not the time to lose faith in the one who holds our salvation! Have you ever heard the saying, people fall away from God for the same reason they fall out of bed? They were never in far enough! Amen.

Matthew 24:6-8 tells us, “You will hear of wars and rumors of wars, but see to it that you are not alarmed. Such things must happen, but the end is still to come. Nation will rise against nation, and kingdom against kingdom. There will be famines and earthquakes in various places. All these are the beginning of birth pains.”

These predictions will come to pass and no amount of praying will eliminate it. My prayers no longer encompass, “Lord please let there be no more wars, killings, diseases, famine, etc.” My prayers are now for strength in the battle ahead. We can’t pray away everything.

We know that God doesn’t remove difficulty, because He uses the difficulty to develop and instruct us. I feel like we lose faith when we are inconsistent or insincere in our prayer life; when we feel like Jesus is not answering us the way we want. It’s a lack of personal investment. It’s weird because in the end this will be the only investment that pays the highest interest rate of all times. Enjoy your many blessings, on purpose, investing in HIM!”

As I read this, I had a real “Ah-ha” moment!! This is exactly right. (It is the word of God after all.) What was I thinking? I had lost sight of God’s truth as I let my morning evening news draw me into the desperation of the times.

I don’t think God simply watches all that goes on and says, “See? I told you so.” I think it all breaks His heart too. But even so He promises us His strength in times like these and every time we face or hear about life’s difficulties and challenges.

These are God’s words to us: “Be strong and courageous. Do not be afraid or terrified because of them, for the LORD your God goes with you; he will never leave you nor forsake you.” Deuteronomy 31:6